SvenskBladet can confirm that Magnus Uggla is near to a 'total breakdown' according to sources who are concerned about the singer's mental health. The problems became acute after Uggla made the decision to withdraw his songs from the Spotify streaming music service, whineging that he wasn't earning enough from song sales.

According to reports Sony Music's CEO Hasse Breithotlz rang Uggla and 'congratulated' him on his voluntary Spotify withdrawal adding a stinging 'all we'd like you to do now is to leave Sony altogether'. Uggla is said to have erupted in a fit of rage hurling his mobile phone through his living room window, smashing the glass to smithereens. He then went on to trash his 50' plasma tv, overturned furniture and set fire to his piano screaming 'Va fan, Va fan!'. Friends who were in the house were unable to subdue Uggla. Worried neigbours called the police who where soon on the scene. Uggla was still screaming 'Va faaaan, Va faaan' as he was shot by a police officer with a Taser gun.

'This was deemed the safest method of subduing Mr.Uggla. He is now helping police with their enquiries but no charge will be brought against him', says DC Anton Stubble of Lidingö police.

Sony Music's Hasse Breithotlz commented: 'This has been coming. Uggla had been terrorizing my offices by phoning at least ten times a day, hurling abuse and shouting 'Va fan är min Spotify pengar?'. This 'va fan' obsession no doubt stems after the total flop of Uggla's attempt at recent reality tv shows 'Va fan är min band' and 'Va fan är min revy´, both of which were utter rubbish. Magnus should really seek help and instead ask himself 'Va fan är min hjärna'. I wish him well.' 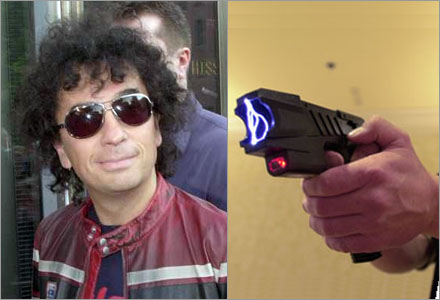 Police were forced to Taser Uggla