Due to threats of a lawsuit Gevalia, the most popular coffee brand in Sweden, has withdrawn its forthcoming advertisement campaign before it was due to hit screens at the end of August. Gevalia tv adverts on the theme 'När du får ett oväntat besök' are very popular with Scandinavian consumers but the marketing team this time wanted to try something different. Gevalia's marketing team used former-UN Secretary Kofi Annan's mug shot placed alongside a packet of Gevalia coffee with the following caption, 'Dricker han en annan kofi?'.

Annan's Swedish wife Nane, who is currently on vacation in Sweden, was tipped off about the upcoming campaign that was leaked to her husband's press office. Gevalia were immediately served a gagging order not to show or publish the advert or face a law suit.

'It's shameful the way Gevalia have used my husband's face in an effort to sell their product. Even the caption is ridiculous! 'Dricker han en annan kofi?', I mean, is that the best they can come up with? Kofi was quite flattered when he saw the advert but also added that, morally, he couldn't go along with it as his favourite coffee is Löfbergs Lila.' said Nane Annan.

Gevalia's press office were unwilling to comment further saying that this was just a 'storm in a coffee cup'. 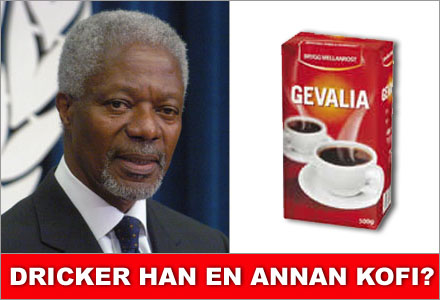 The offending advert behind the "storm in a coffee cup 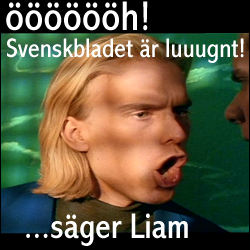